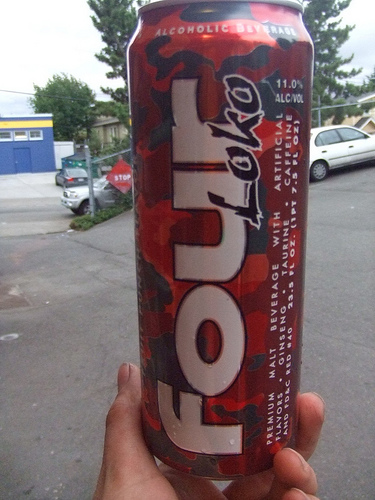 This past New Year’s Eve was definitely one to remember. There were plenty of great friends, great music, and amazing times. We had a great little house party that we attended, and I came across the most interesting drink I’ve had yet. This is Four Loko. This beverage is a caffeinated drink that also has alcohol. It tastes like a strong energy drink, but definitely has the affects of both alcohol and the caffeine. It was definitely worth the try, and something I learned a lot about when I tried to buy it later.

My friend had Four Loko that he brought to the party with him from New York. He said he had been hanging onto it for a while, but that it was the last he could get. I did not understand what he meant by that. I rather figured that it meant he either could not afford more of it or that his wife did not want him to buy more. Either way, I enjoyed what he offered.

Four Loko was rather interesting. It was rather strong in flavor, but it had a great affect. I felt more awake but without losing my buzzed feeling. It has the caffeine level of a cup of coffee, and the alcohol strength of a glass of wine. A wonderful mix, in my mind. The Four Loko beverage did come in a brighter and busier can, initially making me think that it was just an energy drink, until I noticed the 7 warning labels indicating that it did have alcohol in it.

Well, the next day, I found why my friend said he could not get any anymore. The Four Loko product has been taken off the market. There was simply too much risk that it would be used by those who are underage. In addition, there seemed to be a belief that the caffeine level and the alcohol level of the beverage were too high, and therefore too dangerous. I can understand this, but it didn’t deter the feeling of disappointment when I found that Four Loko is not currently on the market.

From what I hear, Four Loko is going to take the caffeine and other stimulants out of the drink all together. This would allow the drink to then be sold on the market. While it is rather sad that the drink would no longer pack the pick-up that it previously had, at least it would be back on the market. The controversy behind the drink might even increase the sales of the beverage, helping it become an absolute hit.