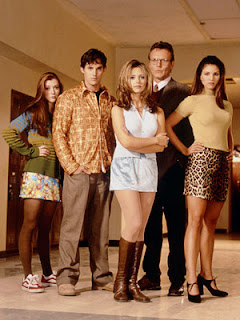 I will admit it, I am a nerd. I did spend my Sunday evening watching Chiller’s Buffy the Vampire Slayer’s marathon. While I was doing this, I noticed something rather interesting. I noticed leggings, cute dresses and current hairstyles. I noticed that she was dressed just like the women are dressed today, and I was rather interested. This was proof of what people have been saying for years!

Fashion does come back around. Although Buffy the Vampire Slayer was never known as being a fashionable show, they did always keep Buffy in the range of acceptable and current fashions. They did make sure that her hair was done in the fashionable styles and that her outfits were both cute, age appropriate and higher end. There were also several very fashionable girls on the show that give a very accurate depiction of high fashion in California and the rest of the United States at the time.

Although fashions are thought to come around every thirty, there is a difference in the time between different fashions. Generally, it is considered to be every generation or so. Buffy’s show was only 13 years ago, considerably faster than the average fashion generation. This may be because of the recession or the decreased time between generations. Either way, the fashions are back.

What did I notice that was so familiar? The leggings. Yeah, when they came out, everyone mentioned how they looked like the familiar leggings of the 1990’s, but no one was able to mention a popular show that featured them. Well, Buffy definitely has the same leggings as the women are wearing now. In addition, the slouching sweaters and boots were the rage then, and they are the rage now.

Next time you see a marathon from the 1990’s, watch it. See if you don’t notice the same outfits being worn from that era to this era. It is rather amusing to see what we looked like then, and then compare how the kids of today are dressing and how the adults are dressing. You night just see what I see.